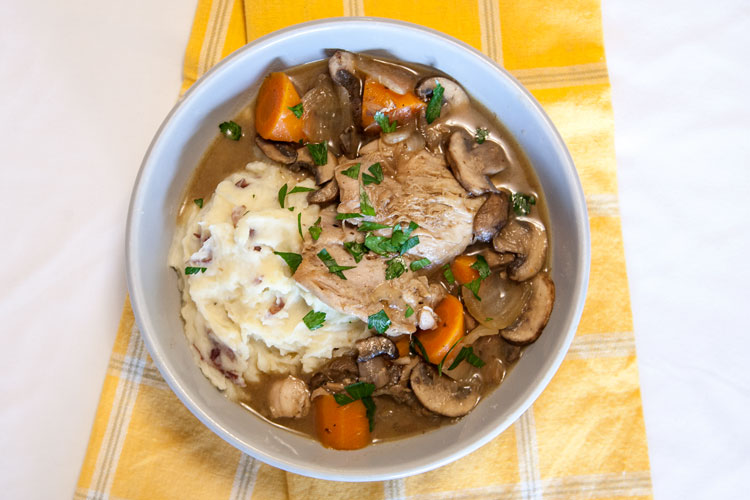 Bonjour, my friends. To begin this month’s pressure-cooking extravaganza (Insta-Pot-tober??), let’s kick off with something special: it’s French, it’s fancy, and it’s a double-decker one-pot wonder:

Layer 2 is a basket full of quartered potatoes and whole garlic cloves, which happen to steam to mashable perfection in the same pressure-cooking time as your main course. (sacre bleu!!)

When I think about coq au vin, I think about the first time I flipped through a hand-me-down copy of Julia Child’s Mastering the Art of French Cooking as a middle-schooler. (Yes, even at this age, already a hopeless food nerd. Baby, I was born this way.) I was entranced. The parade of recipes revealed a deep well of collective culinary knowledge, which Julia seamlessly integrated into this sweet, empowering field guide for the “servantless American cook.”

Skipping ahead to 2017, I still think Julia is a badass, and that not much is better than spending a leisurely day in the kitchen with her recipes. But when I want to streamline the operation, this is how I throw together a quickie, keep-it-simple coq au vin by taking advantage of Instant Pot.

Bacon is optional, but traditional; if you have a slice on hand and you feel so inclined, you can start the recipe by crisping it up in the Pot on Saute Mode. Use the rendered fat (and/or olive oil) to saute a big pile of sliced mushrooms, then set them aside so they won’t overcook in the stew.

Next, season and brown your chicken. In these photos I used boneless/skinless thighs, but I think bone-in pieces would be good here too (I haven’t tested it, but I would plan to increase the cooking time to 10 minutes). After browning the chicken, set it aside and start the onions. Pearl onions are my very favorite thing for this dish, but I’ve been having trouble finding them at my local stores, so I swapped in a regular old chopped yellow onion and lived to tell the tale.

Deglaze with wine (red or white, whatever you like, go nuts) before throwing in (nearly) everything else on the ingredient list, then get out your steamer basket and load it up with the potatoes and garlic. I called for a generous amount of potatoes to serve 4, but abundance is nice, and leftovers are always welcome in my house. Both layers cook up in just 5 minutes on high pressure.

The biggest secret behind this recipe may be the beurre manie. This “kneaded butter” is a simple flour/butter mixture that, when whisked into the cooked stew, transforms it into an enriched, subtly thickened, velvety sauce.

After making that magic happen, you just have to add the mushrooms back in, mash your garlicky potatoes, top with fresh parsley, and eat like a king.

For the Coq Au Vin:

For the Garlic Mashed Potatoes: