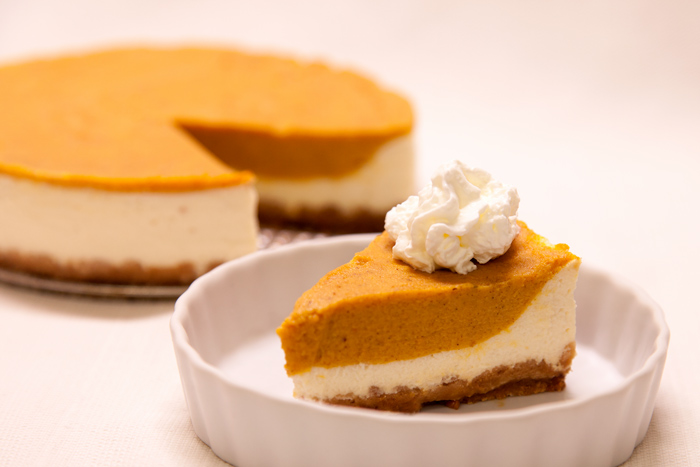 Pumpkin cheesecake is a beloved Thanksgiving tradition in my family. Since I was a little girl, my mom has always slipped a cheesecake layer underneath her annual pumpkin pies… and everyone loves her for it!

The layering is essential, if you ask me. I am not satisfied with the mere pumpkin-flavored cheesecakes of the world, which homogenize together into less than the sum of their parts. This dessert shines from the contrast between rich vanilla cheesecake, and a pure, silky, spiced pumpkin custard layered on top.

If you don’t already know, believe it: Instant Pot is a secret weapon for effortlessly perfect cheesecakes. This fall, let your pressure cooker help you serve up this irresistible seasonal treat!

(Your Instant Pot can also help you make dessert even more special, with your own DIY homemade pumpkin puree… See: Insta-Pumpkin!)

Pumpkin Cheesecake and ginger snap crust are a match made in heaven. If you’re looking to avoid gluten or would just rather not use cookies, I have an almond-based crust that I like too – more on that to follow.

The cheesecake layer uses my Greek Yogurt Cheesecake recipe, which replaces half of the cream cheese with yogurt and is still super creamy and delicious. If you have a different Instant Pot cheesecake recipe that you prefer, you can certainly cut it in half and use it here instead.

Finally, the pumpkin pie layer is a scaled-down version of the traditional, tried-and-true pumpkin pie recipe that my (superstar cook) mom had made for years, with one small exception. This recipe is made without evaporated milk; I use heavy cream instead. Because the custard volume is so small for this Instant Pot sized cheesecake, it annoys me to open a can of evaporated milk and only use a little splash. By using cream instead, I get to whip up the rest of the carton to serve with the Thanksgiving pie spread. Practical!

Yes, this can be made without gluten! I’ve included a recipe for my favorite gluten free crust made with almonds. I regularly make DIY almond milk, and the leftover pulp can be dried to make coarse crumbs that are just perfect for this job. If you don’t have a surplus of leftover almond pulp around the house like I do, I think the closest substitute would be a defatted almond meal product.

Add warm spices to recreate the ginger snap flavor, OR try a chocolate one instead!! You can find that version on my Dark Chocolate Greek Yogurt Cheesecake recipe.

Healthy-ish! Since my Greek Yogurt Cheesecake recipe swaps half of the cream cheese for yogurt, it has a bit less fat and more protein than your average cheesecake. It is certainly still an indulgence.

What about the added sugar? This dessert is rich, but not at all overly sweet. Depending on your crust/cookies, each slice ends up containing only about 1 teaspoon of added sugar. Very reasonable sweet treat, if you ask this dietitian! 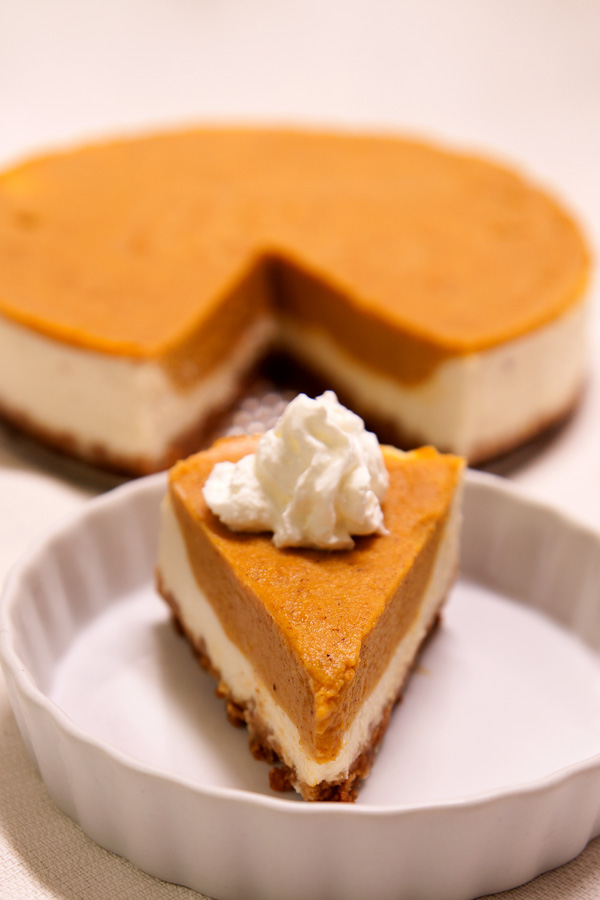 Start with the crust:

Hungry for more pressure cooking this pumpkin season? Try these!